Story of the day – Sharing a Legacy of Love

I found this story on rd.com (Readers’ Digest). It is filed under true stories. I don’t know if it is, but I love the story, and I think you will too.

I have a very small creche in my small house (only a few inches high), with inexpensive figures made of some kind of flexible resin that I got at Michael’s Craft Store. I made my creche out of cardboard, glue and paint. I use it every year, and the one in this story reminded me immediately of my own very humble creation of the manger scene. It has Mary, Joseph, baby Jesus, a donkey, a cow, a couple of shepherds and sheep and the three wise men with their camels. There is also the angel announcing the Savior’s birth. I attach it to the roof with a twist tie through a hollow in the corrugated cardboard roof. 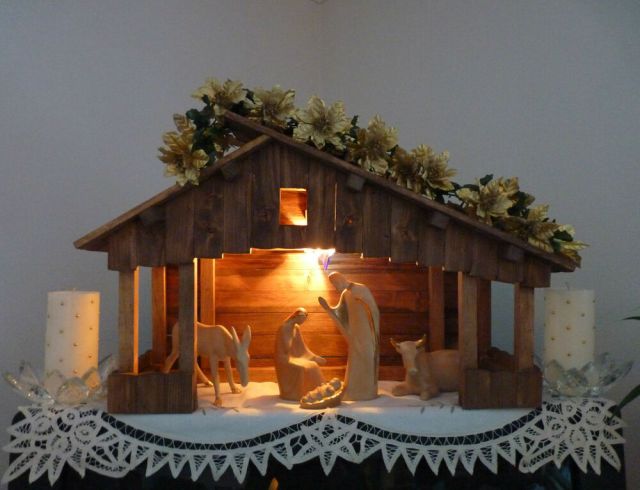 When my mother died at the age of eighty-four, my four sisters and I were heartbroken. How could we ever get over the loss of this warm and loving woman, a talented artist who enjoyed life in spite of its challenges and always doted on her husband, daughters and grandchildren?

For weeks after, my sisters and I would meet for dinner, laughing and crying over old memories. When it came time to sell the home my mother loved, we spent many days in disbelief, clearing out her belongings. I remembered reading an Ann Landers column years earlier that discussed how many siblings fight bitterly over the possessions left by their deceased parents. I thought, “How lucky we are that will never happen to us.” Somehow, we easily and peacefully divided Mom’s belongings—furniture, jewelry, and household items—among ourselves and a few charities. Although I expected there might be a tug of war over her paintings, that never happened. Pretty good considering there were five daughters and four grandchildren. No conflicts, squabbles or disputes at all. Until we discovered the old nativity set in a box in Mom’s closet.

I remembered Mom telling the story of how she acquired the manger. An old friend who did carpentry work gave it to my mom and dad as a Christmas gift when they were first married. My sister, Eileen, however, remembers it differently. Mom told her she found the crèche in a garbage can belonging to Mrs. Bingham, the elderly lady who lived across the street from us.

Unlike some of the ornate versions found in today’s stores, this manger was crafted from dark wood and completely unadorned—just a roof, a floor and a railing surrounding it. Though beautifully crafted, there was one flaw: one side of the double gate in front was lopsided. Mom filled it with three figurines to start—Mary, Joseph and the Baby Jesus. For many years after, she continued to add others—the Wise Men, shepherds, angels, and animals. As kids, we loved the annual rites of the Christmas season, especially taking the nativity set and decorations down from the attic and carefully putting them in place. When the sisters all married and grandchildren came along, they added new characters of their own to the stable, including a set of the three little pigs.

After Mom’s death, when the nativity set emerged, no one was prepared for the battle that would follow. My sister Joanne was the first to claim the manger, insisting it was the only one of Mom’s possessions that she really wanted. Her wish was granted. But when my niece Mandy found out, she called from her apartment in California to voice her objection. She was clearly emotional as she repeated a decades-old promise made to her by my mother: “Nanny promised me that I could have the nativity set when she was gone,” she cried. “The nativity set belongs to me.” Joanne felt strongly that as Mom’s daughter, she had first dibs. Neither she nor Mandy would budge.

When the disagreement showed signs of becoming a full-blown family feud, we realized something had to be done. Enter the family arbitrator, my sister Eileen, who somehow saw through the fog. But as Mandy’s mother and Joanne’s sister, could Eileen handle this dilemma fairly? Temporarily, she set aside the emotion of the dispute, and thought logically. The nativity set was just a wooden stable, not an irreplaceable masterpiece of art. The beauty was in the eye of the beholders, the perception of two people who coveted a simple item owned by someone they loved. Couldn’t a copy be created? Of course! She would order the wood from the lumberyard and get someone to build a second manger.

The following day, Eileen went to Centre Millwork and stood in line behind several contractors ordering lumber from a young man with a crewcut. He was wearing a tag with his name, Brett, written in green magic marker. When Eileen’s turn came, she had to shout over the sound of buzzing saws. She pointed to the nativity set in her arms and told him the story, explaining that it was causing a major rift between her sister Joanne and her daughter Mandy. Brett took the stable from her, held it up with one hand and laughed, “They’re fighting over this?”

“Yes,” Eileen explained. “I know it seems crazy, but it was my mother’s and they both loved her very much. Is there any way you could measure and cut some wood so we could have a duplicate built?

Brett said, “Leave it here. I’ll see what I can do.” Eileen left, hoping he could come up with a minor miracle. That’s what it would take to satisfy the two women in her life that were squabbling.

A few days later, she received a phone message saying that her order was ready. When Eileen arrived at the hardware store to pick up the wood, she couldn’t believe what she saw — two identical stables sitting side by side. Brett had not only cut and measured the wood, he had built a second manger. “I know you wanted them to look the same, so I added a couple of dings and flaws that were in the original. Hope that’s okay.”

Sure enough, the new stable had the same lopsided front gate. “Okay?” Eileen said in tears. “You have no idea what this will mean to my sister and my daughter. To the entire family. I don’t care what this costs. Your work has saved the day.”

“That will be $3.75 for the materials,” Brett said. When Eileen insisted on paying him more, he said, “I didn’t do it on company time. I built it at home so I won’t charge you for the labor.” He pointed to the new manger. “I hope this helps your family have a merrier Christmas.”

Eileen left Brett with a large tip and a big hug of thanks. When she got home and called Joanne and Mandy about her creative solution, they were very happy and extremely relieved that the problem was resolved. One phone call later, Joanne and Mandy had agreed that Joanne would take possession of the new stable as well as some of the old figurines—including Mary, Joseph and the infant. Mandy would get to keep the original—just as Nanny promised.

This entry was posted in Holidays, Uncategorized. Bookmark the permalink.