Bringing back an oldie (from 2016). What are your favorites? Two additions (also from Downton Abbey) are:

h’aporth – As in “you daft h’aporth”. Half penny worth. A silly or foolish person. 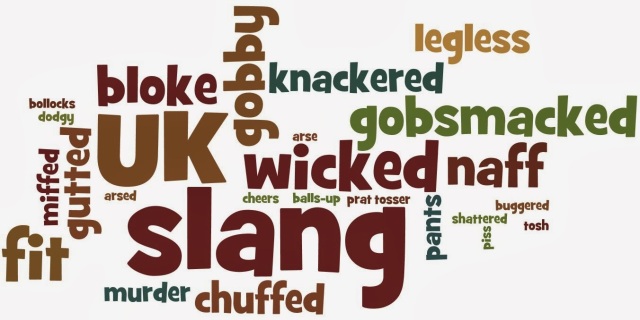 I admit to being a devotee of British dramas, mysteries, and comedies, and occasionally I come across a term that I don’t understand, and have to look it up. Lately, I’ve been watching Downton Abbey, Foyle’s War, Midsomer Murders, and Agatha Christie Mysteries. Then there’s Miss Fisher Mysteries, an Australian production. Here are some of the terms/words/phrases I’ve run across. Any that you’ve heard and been perplexed by?

Jumped up (adjective) – denoting someone who considers themselves to be more important than they really are, or who has suddenly and undeservedly risen in status:
“she’s not really a journalist, more a jumped-up PR woman.” Heard on more than one program, but especially on Downton Abbey, when Violet’s maid calls Dr. Clarkson a “Jumped up old sawbones.”  I love this one, and will attempt to include it in my own vocabulary.

All Sir Garnet – Said by Thomas Barrow on Downton Abbey (suspected things were not “All Sir Garnet”). This is a one-time British army slang term meaning that all is in order or everything’s OK. It’s a memorial to one of the most famous soldiers of the latter nineteenth century, Sir Garnet Wolseley, later Viscount Wolseley.

Cheeky – Playfully impertinent. “Did you just whistle at that old lady? You cheeky monkey.”  Mrs. Patmore calls a local merchant a “cheeky devil” for flirting with her.

erysipelas – Erysipelas is an infection of the upper layers of the skin (superficial). Erysipelas results in a fiery red rash with raised edges that can easily be distinguished from the skin around it. Mentioned on Downton Abbey, when Isobel Crawley mistakenly diagnoses Mr. Moseley’s rash as erysipelas, when it really is a rash caused by an allergy to rue.

King Canute (Cnut, Knud) – King of Denmark, England and Norway, together often referred to as the Anglo-Scandinavian or North Sea Empire. After his death, the deaths of his heirs within a decade, and the Norman conquest of England in 1066, his legacy was largely lost to history. The medieval historian Norman Cantor has stated that he was “the most effective king in Anglo-Saxon history”, although Cnut himself was Danish, not British or Anglo-Saxon. Cnut’s name is popularly invoked in the context of the legendary story of King Canute and the waves, but usually misrepresenting Cnut as a deluded monarch believing he had supernatural powers, when the original story in fact relates the opposite and portrays a wise king. Mentioned by the dowager Countess Violet Crawley on Downton Abbey.

Blue crested hoopoe – The rare bird that the bird watchers argue about in an episode of Midsomer Murders is a Blue Crested Hoopoe – which doesn’t exist. A Hoopoe does, which is a colorful bird found across Afro-Eurasia, notable for its distinctive “crown” of feathers. It is the only extant species in the family Upupidae.

Casu marzu – Also seen on Midsomer Murders. Literally translating into English as “rotten/putrid cheese”, is a traditional Sardinian sheep milk cheese, notable for containing live insect larvae (maggots). Although found in the island of Sardinia, a variety of this cheese is also found in the nearby Corsica, where it goes by the name of casgiu merzu.

Parvenu – a person from usually a low social position who has recently or suddenly become wealthy, powerful, or successful but who is not accepted by other wealthy, powerful, and successful people. The word is borrowed from the French; it is the past participle of the verb parvenir (to reach, to arrive, to manage to do something).

Don’t tell the world about it – Heard more than once, but Lady Flintshire says it when her husband mentions aloud that their days of personal servants are over because of their reduced circumstances.

Blighty – a wound suffered by a soldier in World War I that was sufficiently serious to merit being shipped home to Britain: “he had copped a Blighty and was on his way home”. Mentioned by Lady Cora Grantham’s maid, speaking about Thomas Barrow’s war injury. 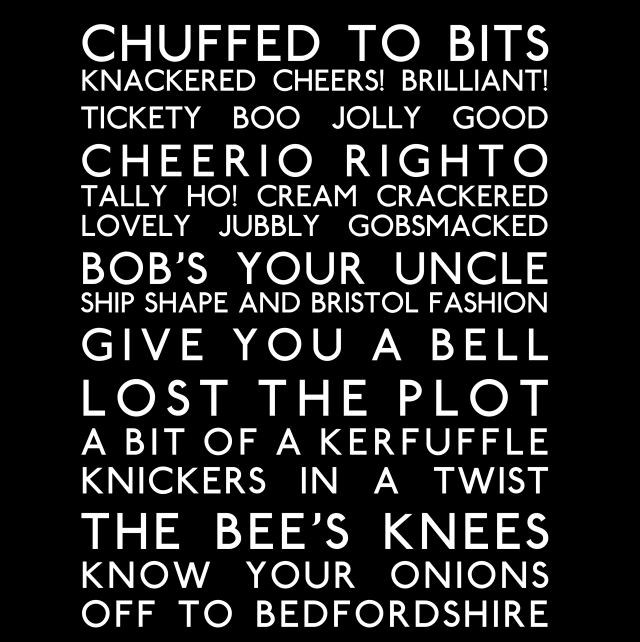 Punter – customer or user of services (more specifically, of businesses which “rip off” the customer). Occasionally refers to a speculator, bettor, or gambler, or a customer of a prostitute.

Bob’s Your Uncle – There you go!

Her Majesty’s Pleasure – To be in prison

Slap And Tickle – making out or heavy petting.

Gutted – a British slang term that is one of the saddest on the lists in terms of pure contextual emotion. To be ‘gutted’ about a situation means to be devastated and saddened. For example, ‘His girlfriend broke up with him. He’s absolutely gutted.’

Taking The Piss – Given the British tendency to mock and satirize anything and everything possible, ‘taking the piss’ is in fact one of the most popular and widely-used British slang terms. To ‘take the piss’ means to mock something, parody something, or generally be sarcastic and derisive towards something.

Dodgy – In British slang terms, ‘dodgy’ refers to something wrong, illegal, or just plain ‘off’, in one way or another.

Scrummy – One of the more delightful British slang terms in this list, ‘scrummy’ is used as a wonderfully effusive term for when something is truly delicious and mouth-wateringly good (Heard on The Great British Baking Show.)

Kerfuffle – A rather delightful and slightly archaic word is ‘kerfuffle’. ‘Kerfuffle’ describes a skirmish or a fight or an argument caused by differing views.

Wanker – Possibly the best British insult on the list, it fits a certain niche for a single-worded insult to lobbied out in a moment of frustration, anger, provocation, or, of course, as a jest amongst friends. ‘Wanker’ fits the closest fit by ‘jerk’ or ‘asshole’, but to a slightly higher value.

Brilliant – not a word exclusively in the British lexicon, but has a very British usage. Specifically, when something is exciting or wonderful, particularly when something is good news, ‘brilliant’ can mean as such.

Chin-wag – A chat or brief conversation.

Collywobbles – Nervousness; butterflies in the stomach.

Blimey – (informal) an exclamation of surprise. (Originally gor blimey, a euphemism for God blind me, but has generally lost this connotation.)

Bubble and Squeak – dish of cooked cabbage fried with cooked potatoes and other vegetables. Often made from the remains of the Sunday roast trimmings. 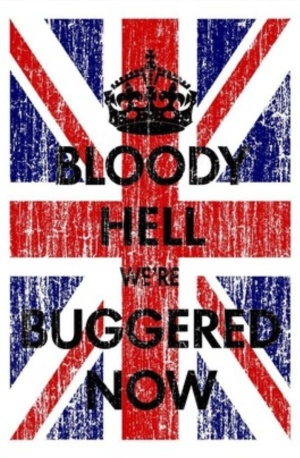 This entry was posted in Hobbies & General Interest, Humor, The Culture, Uncategorized. Bookmark the permalink.

7 Responses to Words, Terms and Slang learned from British Television