On the evening of October 8, 1871, Catherine O’Leary stepped outside her house in Southwest Chicago. She fed the horses and led them to the barn before retiring for the night. Catherine and her husband Patrick were already in bed when a neighbor noticed flames coming from their barn. He alerted the O’Learys’, but dry and windy conditions allowed the fire to grow out of control. Within ten minutes, two blocks were ablaze.

The fire came to be known as the Great Chicago Fire, and by October 10th, it consumed some five square miles. More than 17,000 buildings burned to the ground, and 300 people died. Although folklore states that the fire began when Catherine’s cow kicked over an oil lamp, no one really knows how it started. 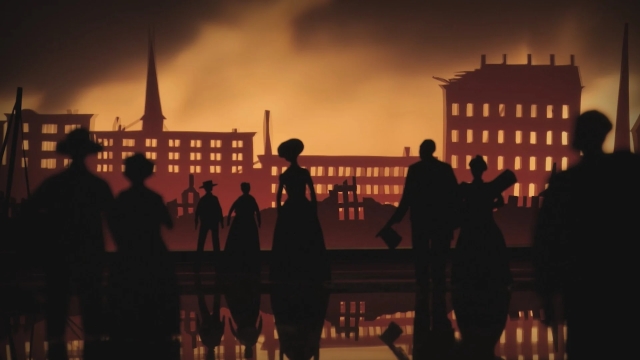 The Great Chicago Fire began on a Sunday evening in O’Leary’s barn on the south side, and burned until Tuesday morning as far north as Lincoln Park.

Fall 1871: Chicago is a tinderbox. In three months, only an inch of rain has fallen. For days a strong, hot wind has blown in from the southwest. The city of wooden buildings and raised wooden sidewalks is ripe for the fire that will destroy three-quarters of the city. Chicago is about to suffer one of the world’s worst urban disasters. 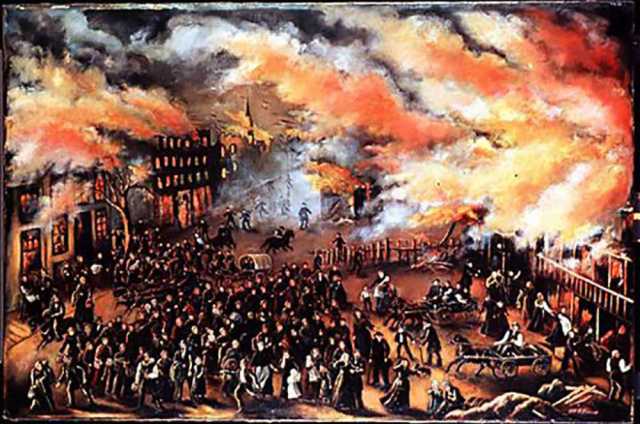 Some time between 8:30 and 10:00 pm, a fire starts in the O’Leary family’s barn at DeKoven and Jefferson Streets. A watchman spots the fire from the courthouse tower, but locates it near Canalport and Halsted. Realizing the error, he tries to change his report. But the telegraph dispatcher, fearing confusion, refuses. Meanwhile a storekeeper near the fire pulls the hook on one of the city’s new fire-alarm boxes, but it fails to work. Just before 10pm, seven fire companies arrive — too late to control the blaze.

By midnight, the gasworks explodes, fueling the fire and leaving most of the city without lights. Shortly after that, flames engulf Conley’s Patch, a poor Irish area of the city, so quickly that many residents are unable to escape. Soon, the supposedly “fire-proof” Courthouse begins to burn. Authorities release prisoners held there. State Street Bridge, a major conduit to the thus-far safe North Side, also begins burning. 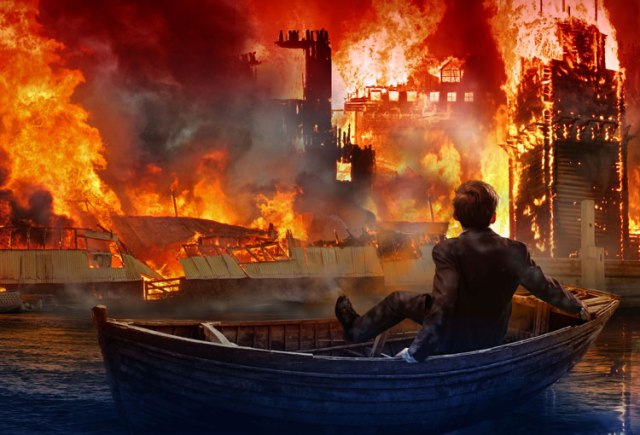 “The rail of the bridge was broken away. How many people were pushed over the bridge into the water I cannot tell. I myself saw one man stumble under a load of clothing and disappear…” {Lake Street Bridge} — Alexander Frear, New York alderman

The fire leaps the main branch of the Chicago River and burns fiercely in the North Division. Heat, dust, and cinders drive residents to Lincoln Park and the cemetery at its southern end. By 3am, all hope of saving the city is shattered as the Waterworks goes up in flames. The wooden roof catches fire, and as it breaks apart, it destroys the pumps below. The city’s main source of drinking water is contaminated. 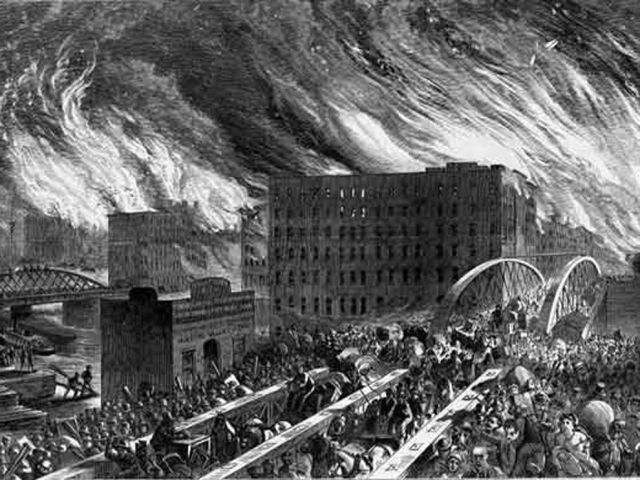 “There was a strip of fire between two and three miles long, and a mile wide, hurried along by a wind, sweeping through the business part of this city…. It was a grand sight, and yet an awful one.” {Lake Street Bridge} — William Gallagher, Chicago Theological Seminary student

Escaping city residents are forced as far east as they can go — to the edge of Lake Michigan. Clusters of people, belongings, and animals are trapped on the shoreline. People begin to wade into the water as Michigan Avenue blazes steadily. Horse-drawn wagons, furniture, personal belongings, and people clog the wooden plank-lined streets. 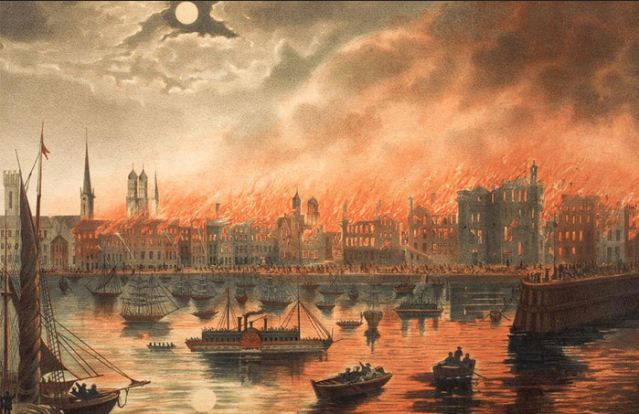 ” …the immense piles of lumber on the south of us were all afire…. Dense clouds of smoke and cinders rolled over and enveloped us, and it seemed almost impossible to breathe…. Some persons drove their horses into the lake… and men, women, and children waded out and clambered upon the wagons to which the horses were attached, while the lake was lined with people who were standing in the water, all with their backs to the storm of fire…” {Lake shore, Ontario and St. Clair Streets} — Lambert Tree, Cook County Circuit Court Judge

William Ogden’s enormous lumber yard and railroad on the river bank burns. The fire spreads to the Illinois Central railroad complex and the McCormick Reaper Works. Thousands of people remain trapped at the lake’s edge. North Side residents are pushed farther north to the prairie.

“My remembrance is of a steadily and sullenly advancing wall of smoke shot with fire; of a burning church on Chicago avenue. The steeple was so hot that when it ignited at the base a pillar of flame shot upward to the top.” {Chicago Avenue and Clark Street} — A. S. Chapman, 7 years old at the time of the fire

24 hours later, many city residents who have been fleeing all night and day are forced to run again as the fire reaches the prairie. Most leave behind the possessions they have brought with them. Some bury important items, which they will try to find later. Rain falls Monday night, extinguishing some of the fire.

“…I had to wake the children up, and we had to run again, and leave everything to burn, this time we felt the heat on our backs when we ran, like when one stands with the back to a grate fire…” {Wells Street and North Avenue} — Julia Lemos, North Side working mother 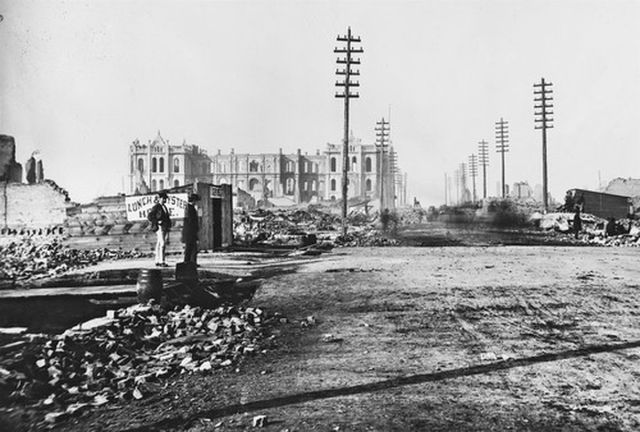 As the last of the flames die out, Chicagoans survey their wrecked city. Seventy-three miles of streets and 17,450 buildings have been destroyed. A third of the population is homeless. Some struggle to comprehend the tragedy; others immediately set to the work of rescue and repair.

An official inquiry determines that shoddy construction, lax building inspection, and a poorly-equipped fire department are to blame. Yet many hold Catherine O’Leary responsible, including the press. Although she was in bed the night of the fire, not in the barn with her cow, she will spend the rest of her life — 24 years — a virtual recluse. Over time, her alleged role in the Great Fire passes into legend. 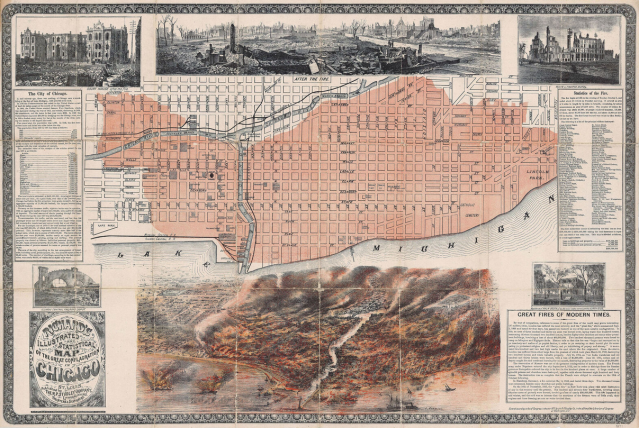 And then . . . the great rebuilding began.

This entry was posted in History. Bookmark the permalink.