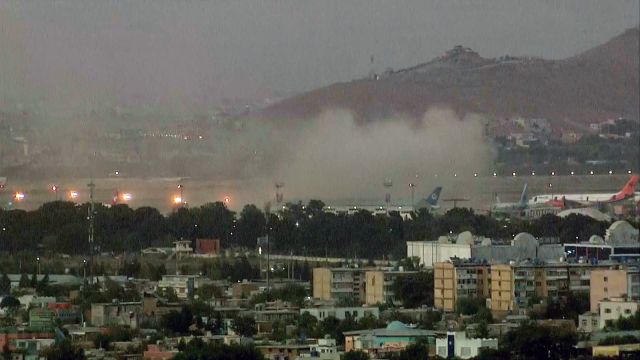 Two suicide bombs and a gunman struck one of the main entrances to Kabul’s international airport on Thursday, killing dozens of civilians and at least 12 US service personnel, hours after western intelligence agencies warned of an imminent and “very credible” terrorist threat.

US and other western officials blamed the Afghan branch of Islamic State and voiced concern over fresh attacks at the airport, while the UK warned aircraft to avoid Afghan airspace under 25,000 feet because of the threat of surface to air missiles. On Thursday night, Islamic State claimed responsibility the attack, the group’s Amaq news agency said on its Telegram channel.

An Afghan official said that 60 Afghans had died, with more than 140 injured. US officials said 11 marines and a navy medic had died and 15 were injured. The death toll is expected to rise. According to a Taliban spokesperson, the victims included children.

One eyewitness described the moment of the blast to the New York Times. “The crowd was packed and people were pushing,” said Barat. “I tripped and that’s when the explosion happened. I think four or five soldiers were hit. We fell to the ground and the foreign soldiers started shooting. There were bodies everywhere, people were running.”

“Bodies, flesh and people were thrown into a canal nearby,” said Milad, who was also at the scene of the first blast. When people heard the explosion there was total panic.”

11 Marines & 1 Navy Corpsman
have been killed by homicide bombers at #KabulAiport. I am so sad right now. We will hear a lot about “blood” on @JoeBiden’s hands. For now, let’s pray 🙏 for the families. By the way: how convenient is it for the Taliban to blame #ISISK? #KabulBlast pic.twitter.com/bo4touSAqY

This entry was posted in Afghanistan Withdrawal, Biden Corruption, Government. Bookmark the permalink.