Shortly after dawn on June 7, Lt. Horace Henderson of the Sixth Engineer Special Brigade landed on Omaha Beach. Going in on his Higgins boat, “I noticed that nothing moved on the beach except one bulldozer. The beach was covered with debris, sunken craft and wrecked vehicles. We saw many bodies in the water… We jumped into chest high water and waded ashore. Then we saw that the beach was literally covered with the bodies of American soldiers wearing the blue and gray patches of the 29th Infantry Division.” 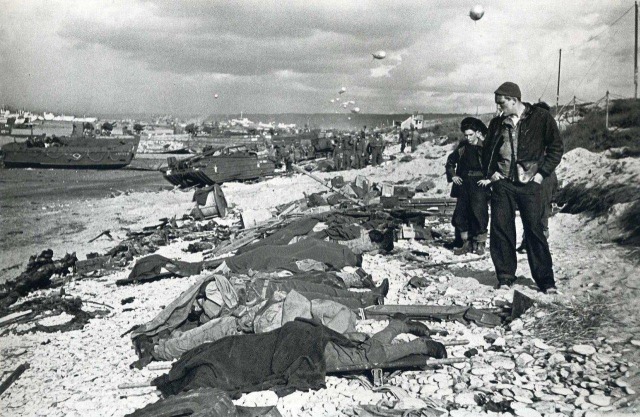 Although the fighting had moved inland, sporadic artillery shelling and intermittent sniper fire from Germans still holding their positions on the bluff hampered movement on the beach. Henderson’s job was to distribute maps (a critical and never-ending process — eventually in the Normandy campaign, the U.S. First Army passed out 125 million maps), but because the front line was just over the bluff at Omaha, only men, ammunition, weapons, and gasoline were being brought ashore, so he had no maps to hand out. He and his section unloaded jerry cans of gasoline, the first of millions of such cans that would cross that beach.

Sometime that afternoon, Henderson recalled, “Before the bodies could be removed, the first religious service was held on Omaha Beach. We prayed for those who had been lost and thanked the Lord for our survival. I promised God that I would do all in my power to help prevent such a terrible event ever happening again.”

This entry was posted in History, Military, Uncategorized. Bookmark the permalink.