What to eat on St. Patrick’s Day? 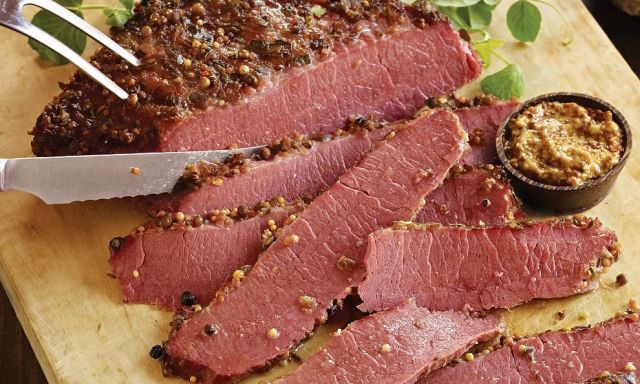 This ^^^ isn’t what I am eating on St. Patrick’s Day, but maybe some day soon! The traditional favorite, accompanied by root veggies and cabbage. My mother called it a “boiled dinner”, and she also made that with ham, as well as corned beef.

There are many dishes that the Irish eat which I enjoyed as a child growing up, even though we never considered them to be Irish. Most of them contained potatoes in some form or another. Potatoes and beets. Potatoes and beets and corned beef (red flannel hash). Potatoes and cabbage and/or onions (colcannon). Potatoes are probably my favorite food. Did you ever wonder what the Irish ate before they had potatoes which, after all, came from the New World? I ran across this article from Bon Appetit, and it’s very interesting.

What the Irish Ate Before Potatoes

What was Irish food like for the 1500 years between Patrick and potatoes?

The short answer is: milky. Every account of what Irish people ate, from the pre-Christian Celts up through the 16th-century anti-British freedom fighters, revolves around dairy. The island’s green pastures gave rise to a culture that was fiercely proud of its cows (one of the main genres of Ancient Irish epics is entirely about violent cattle rustling), and a cuisine that revolved around banbidh, or “white foods.”

There was drinking milk, and buttermilk, and fresh curds, and old curds, and something called “real curds,” and whey mixed with water to make a refreshing sour drink. In 1690, one British visitor to Ireland noted that the natives ate and drank milk “above twenty several sorts of ways and what is strangest for the most part love it best when sourest.” He was referring to bainne clabair, which translates as “thick milk,” and was probably somewhere between just straight-up old milk and sour cream. And in the 12th century, a satirical monk (this is Ireland, after all), wrote a fake “vision” in which he traveled to the paradise of the Land of Food, where he saw a delicious drink made up of “very thick milk, of milk not too thick, of milk of long thickness, of milk of medium thickness, of yellow bubbling milk, the swallowing of which needs chewing.” And many British tacticians, sending home notes on how best to suppress local rebellions, noted that the majority of the population lived all summer on their cows’ milk, so the best way to starve out the enemy would just be to kill all the cows.

Read the rest of the article. It’s interesting, particularly if you enjoy cooking. They go on to say that the Irish eat more butter per capita than anywhere else. The other thing the Irish subsisted on in ancient times was grains (bread and porridge), particularly oats, as in griddled oat cakes. Apparently Irish Soda Bread didn’t show up until the 1800’s.

I think I might make traditional soda bread this week. Here’s a recipe to try; they say it’s very traditional:

Heat oven to 450 degrees. In a large bowl, sift together the flour, salt and baking soda. Make a well in the center and pour in the milk. Using your hand, mix in the flour from the sides of the bowl. The dough should be soft but not wet and sticky.

Turn the dough out onto a well-floured work surface. Wash and dry your hands. Knead the dough lightly for a few seconds, then pat the dough into a round about 1 1/2 inches thick. Place it on a buttered baking sheet and using a sharp knife, cut a deep cross in the center of the dough reaching out all the way to the sides.

Bake for 15 minutes, then reduce the oven temperature to 400 degrees, and continue to bake until the top is golden brown and the bottom of the bread sounds hollow when tapped, about 30 minutes longer. Serve warm.

Finally, here’s a cocktail/dessert to sip in honor of the day!

Combine the heavy cream, whiskey and sugar in a bowl and whisk until soft peaks form. Taste it, then fold in more whiskey if you want!

Divide the ice cream between 2 chilled glasses, then very slowly pour the Guinness into each. (Be careful — it will bubble over if you pour too fast!) Serve with the whiskey whipped cream.

So many Irish treats, so little time! What is your favorite?

This entry was posted in History, Holidays, Recipes, The Culture, Uncategorized. Bookmark the permalink.

8 Responses to What to eat on St. Patrick’s Day?