There is some hope, however faint, that somehow the corrupt elements in government and social media will be called to explain their actions and pay for them. At the same time, we know that most media outlets will continue to run cover, rather than doing actual journalism and investigate.

Since the meaning of the First amendment to our Constitution is being interpreted loosely by those in government and the media, it’s important to review the source material:

Congress shall make no law respecting an establishment of religion, or prohibiting the free exercise thereof; or abridging the freedom of speech, or of the press; or the right of the people peaceably to assemble, and to petition the government for a redress of grievances.

The First Amendment applies to federal, state, and local government actors and includes not only lawmakers and elected officials, but also public schools and universities, courts, and police officers. It does not include private citizens, businesses, and organizations.

Freedom of speech doesn’t just apply to the words that come out of your mouth. It applies to a number of different forms of expression, including the written word, online posts and comments.

Social media companies, government officials and media talking heads have been telling us for months that companies like Twitter and Facebook are private companies and, therefore, are not bound by the First Amendment. Now we know that the government has taken an active role in deciding what speech can and cannot be heard or seen on social media.

This is an infringement of the First Amendment right to free speech by the government. We know that the FBI was in weekly contact with Twitter and Facebook, discussing what should be considered “misinformation”, and that the folks at these companies were only too happy to carry out suppression of speech on behalf of the FBI. Because of the nature of the speech being suppressed, and the timing, it is also a clear case of election interference.

In the past, we know that certain conventional media outlets, such as newspapers and television networks, have worked with government employees and political parties to suppress speech, leak confidential information, and interfere in elections in the guise of reporting the news. They have used their own First Amendment rights to shield them from exposure.

The fact that social media companies have been treated as special cases, with special protection, perhaps some real exposure will result in justice for the people. 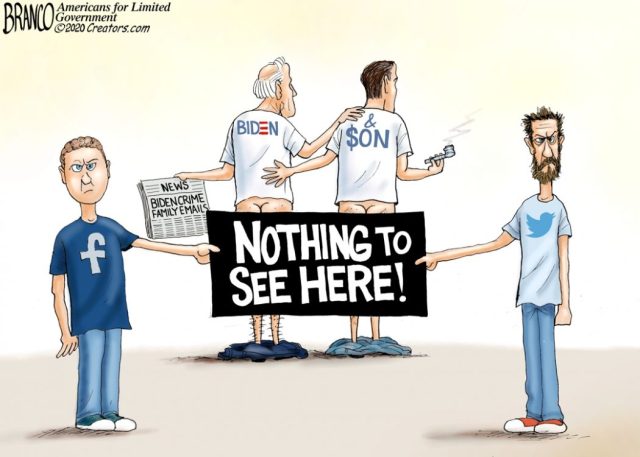 1 Response to Tucker: What we learned from ‘The Twitter Files’