I want to share a story . . . about the power of prayer

Just read this on Twitter, and I immediately wanted to share it with all of you. I know you will understand why.

Want to tell you guys a story.

When I was 12, my brother (15) went on a school field trip at a lake. No one saw what happened but my brother ended up under water for more than 10 minutes and when they found him he was dead. They spent ~30min resuscitating before he breathed.

At the hospital they gave little hope for survival. The odds were stacked too high – pneumonia from lake water in lungs, swelling of the brain, etc etc. Days turned to weeks that we were told every day to expect him to die.

He was transferred to a much bigger children’s hospital in the nearest big city. Top pediatric neurologist was flown in to evaluate: told my dad, “I’m 100% sure he won’t make it. Wouldn’t say this in front of him if I weren’t sure. The compassionate thing is to pull the plug.”

My dad wandered out of the room in shock. Collapsed on the first nurse’s shoulder and wept. Came home to tell us. My mom was all dressed up for a high school reunion. Instead, we all sat on the bed weeping, silent, aching, praying the whole evening.

Next day my parents went back to the experts and said: look, we know we don’t know anything and you guys know everything. But we can’t kill our son. All we have is our faith. Yeah, we know we look very foolish. But we’re going to pray for a miracle instead of taking your advice.

My brother never ‘woke up’ from his coma. He emerged slowly, painfully, one tiny victory at a time. The kinds of victories that wouldn’t be noticed by anyone but desperate loved ones clinging to hope while plausibility is constantly whispering the folly of it.

He had to relearn everything. How to move his limbs. How to swallow his spit, form words, hold his body upright, eat, walk. Thousands of people prayed for him. Miracles happened. Things that don’t make sense. There are too many stories to tell about his recovery in this thread.

Long story short, less than a year after that neurologist’s prognosis with 100% confidence that my brother’s tenuous life wasn’t worth preserving, my brother walked off the elevator and greeted the nurses in that ward at the children’s hospital.

I watched my parents (not unintelligent people, my dad with a PhD in biology), pray to Jesus for a miracle to heal their son. It makes no sense that he was healed. Many many things happened that medically make no sense, resulting in his recovery.

This story isn’t about me. But does it have something to do with why I have faith – why I operate with an understanding that the ‘settled’ science is fallible and there are more dimensions to our humanity than what is seen and measurable? Of course.

It also has to do with why I know it’s okay (more than okay – necessary) to hold fast to your hard-won convictions, especially when Very Smart People tell you those convictions make you pitiable. I’ve applied this lesson on battlefields in my own life. (Have shared some here.)

One last thing: the effects of suffering (trauma) in a person’s life shouldn’t be viewed as necessarily negative. I know my suffering as a kid (some of it truly traumatizing) was a gift to me.

Honestly, something that gives me hope in these uncertain times is that for people who are accustomed to comfort and an illusion of control, suffering hardship would not be entirely a bad thing. I don’t wish suffering on anyone, of course.

What I wish on everyone is that your heart would be increasingly open to the possibility that there’s a God who loves you. That you would be open to being honest with him about why you don’t believe in him (if you don’t) or why you trust him too little (if you do). 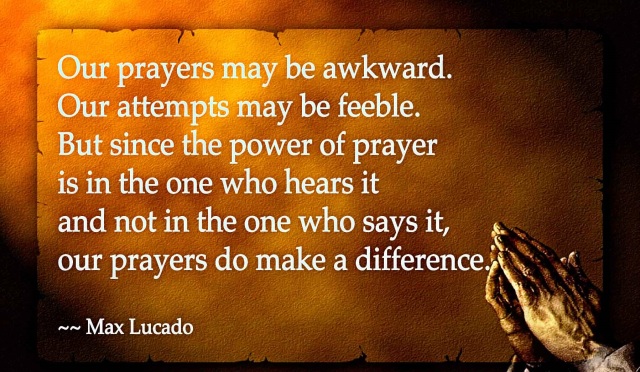 This entry was posted in Faith, Uncategorized. Bookmark the permalink.

4 Responses to I want to share a story . . . about the power of prayer