What I mourn most deeply is our loss of  innocence and unity.

The thing that really stands out in my memories of Sept 11, 2001, is the astonishing unity of the majority of Americans – sadness, love of country, enormous anger towards our enemies.  Remember the members of Congress standing on the Capitol steps, singing God Bless America?

My friends, coworkers and I exchanged emails, as we tried to find ways we could help and honor those who had died in New York, Washington, and Pennsylvania. We joined in the candle lighting on the Friday after the attacks. We watched the service at the National Cathedral, where our President gave an uplifting address to the nation. 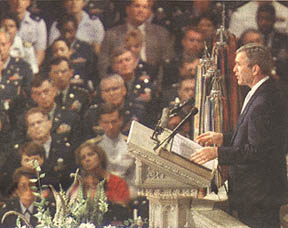 He said, “It is said that adversity introduces us to ourselves. This is true of a nation as well. In this trial, we have been reminded and the world has seen that our fellow Americans are generous and kind, resourceful and brave.
We see our national character in rescuers working past exhaustion, in long lines of blood donors, in thousands of citizens who have asked to work and serve in any way possible. And we have seen our national character in eloquent acts of sacrifice. ……… On this national day of prayer and remembrance, we ask almighty God to watch over our nation and grant us patience and resolve in all that is to come. We pray that He will comfort and console those who now walk in sorrow. We thank Him for each life we now must mourn, and the promise of a life to come. As we’ve been assured, neither death nor life nor angels nor principalities, nor powers nor things present nor things to come nor height nor depth can separate us from God’s love. May He bless the souls of the departed. May He comfort our own. And may He always guide our country.”

It seemed that almost everyone wanted to contribute, to give money, give blood, or donate time, fly flags, say prayers, light candles. We were united as a country as we had not been for a long time.

One of the emails I received contained an editorial from a Romanian newspaper. Perhaps you received it too. I’m repeating it here because I think it is an interesting assessment by an outsider of what America means.

Editorial from a Romanian newspaper by Cornel Nistorescu

Why are Americans so united? They don’t resemble one another even if you paint them! They speak all the languages of the world and form an astonishing mixture of civilizations. Some of them are nearly extinct, others are incompatible with one another, and in matters of religious beliefs, not even God can count how many they are.

The Americans volunteered to donate blood and to give a helping hand. After the first moments of panic, they raised the flag on the smoking ruins, putting on T-shirts, caps and ties in the colours of the national flag. They placed flags on buildings and cars as if in every place and on every car a minister or the president was passing. On every occasion they started singing their traditional song: “God Bless America!”.

Silent as a rock, I watched the charity concert broadcast on Saturday once, twice, three times, on different tv channels. There were Clint Eastwood, Willie Nelson, Robert de Niro, Julia Roberts, Cassius Clay, Jack Nicholson, Bruce Springsteen, Silvester Stallone, James Wood, and many others whom no film or producers could ever bring together. The American’s solidarity spirit turned them into a choir. Actually, choir is not the word. What you could hear was the heavy artillery of the American soul. What neither George W. Bush, nor Bill Clinton, nor Colin Powell could say without facing the risk of stumbling over words and sounds, was being heard in a great and unmistakable way in this charity concert.

I don’t know how it happened that all this obsessive singing of America didn’t sound croaky, nationalist, or ostentatious! It made you green with envy because you weren’t able to sing for your country without running the risk of being considered chauvinist, ridiculous, or suspected of who-knows-what mean interests. I watched the live broadcast and the rerun of its rerun for hours listening to the story of the guy who went down one hundred floors with a woman in a wheelchair without knowing who she was, or of the Californian hockey player, who fought with the terrorists and prevented the plane from hitting a target that would have killed other hundreds of thousands of people.

How on earth were they able to bow before a fellow human? Imperceptibly, with every word and musical note, the memory of some turned into a modern myth of tragic heroes. And with every phone call, millions and millions of dollars were put in a collection aimed at rewarding not a man or a family, but a spirit which nothing can buy.

What on earth can unite the Americans in such a way? Their land? Their galloping history? Their economic power? Money? I tried for hours to find an answer, humming songs and murmuring phrases which risk of sounding like commonplaces. I thought things over, but I reached only one conclusion.

Only freedom can work such miracles!

Cornel Nistorescu (born December 15, 1948) is a Romanian journalist, known for his editorial “Ode to America” regarding the American response to the terrorist attacks of September 11, 2001.[1]

Nistorescu, managing director of the daily newspaper Evenimentul Zilei — News of the Day — published his editorial Sept 24, two days after watching a celebrity telethon in New York for victims of the attacks.

Like his other columns, “Ode to America” was meant for domestic consumption. No one knows when — or how — the article first reached the other side of the Atlantic. But Nistorescu figures it began when someone pulled it off the English-language version of his daily’s Web page and sent it to a friend.

Since then, thousands of Americans at home and expats around the world have e-mailed it to friends, saying it captured their nation’s spirit. It has been read out to U.S. soldiers and on radio talk shows and posted on U.S. Web sites.

Nistorescu says he had no idea his “Ode to America” would resonate so far away.

Nistorescu remains surprised and touched by the success of the piece, one of thousands he has penned in a more than 20-year career.

“It is all about the American spirit and how freedom cannot be crushed,” he says. 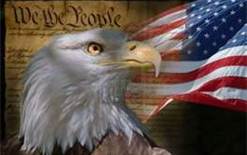 This entry was posted in History, Terrorism, Uncategorized. Bookmark the permalink.