The day my forsythia begins to bloom is my sign that spring has actually begun, and that happened just a few days ago. Even though I noticed that my daffs and tulips are out of the ground, they aren’t blooming yet. Some years the forsythia blooms just before or after a snow shower, but it doesn’t matter to me. I know that will pass shortly, and sometimes so quickly that summer is here before I can catch my breath.

My daughter sent me something that is titled ‘Phenology in the Garden’. I think it’s a really helpful guideline for planting in the garden, at least here in the north. Maybe you will think so too. Here it is. She thinks it came from the Old Farmer’s Almanac: 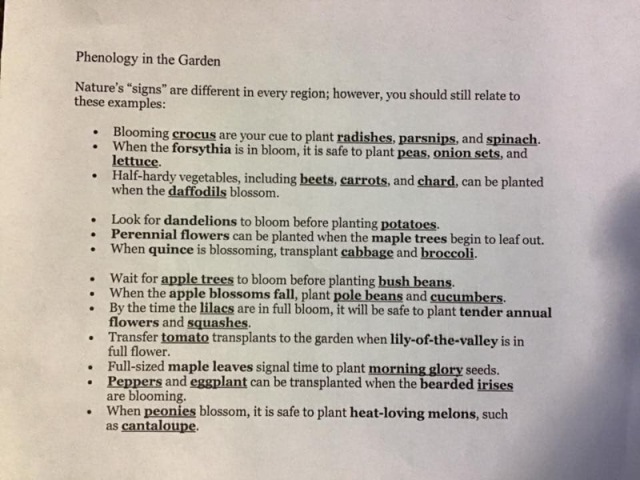 The word ‘phenology’ was coined in the 19th century from the word phenomenon. The Merriam-Webster definition is: “a branch of science dealing with the relations between climate and periodic biological phenomena (such as bird migration or plant flowering.)”

It’s time for salad stuff; hearty greens, peas and onions. I’m in zone 6b, and my last frost date is about April 15. I haven’t started my lettuce/salad mini greenhouse yet; I decided to get a larger bag of potting soil, and will be doing that soon. It will live on my patio table for a while, and I will be able to check on it every time I step out my back door, or even just let the dog out.

If you didn’t see it when I posted about it originally in the comments, here it is again:

I won’t be able to put out tomatoes and peppers for at least another month unless they are protected. Having a small greenhouse this time of year would be really handy. Some of the herbs can go out soon, like the thyme, oregano, parsley and sage. My chives live outside in containers all year; they are already up. The basil can live happily in the house until it is quite warm outside. I will plant more seed for later, both inside and outside. I have some flower seeds too that I should probably start now, along with the cucumbers and some additional peppers.

One thing I like about working in the yard is that I see the plants that remind me of their ‘history’. The forsythia, rose of sharon and bearded iris were shared by a former coworker. The lilac came to me via my daughter’s neighbor, from their cottage in Door County, Wisconsin. A lavender was a birthday gift from a friend. The lily of the valley and bachelor buttons moved with me from my former house.

Nothing is so beautiful as Spring –
When weeds, in wheels, shoot long and lovely and lush;
Thrush’s eggs look little low heavens, and thrush
Through the echoing timber does so rinse and wring
The ear, it strikes like lightnings to hear him sing;

The glassy pear tree leaves and blooms, they brush
The descending blue; that blue is all in a rush
With richness; the racing lambs too have fair their fling.

What is all this juice and all this joy?
A strain of the earth’s sweet being in the beginning
In Eden garden. – Have, get, before it cloy,
Before it cloud, Christ, lord, and sour with sinning,
Innocent mind and Mayday in girl and boy,
Most, O maid’s child, thy choice and worthy the winning.

And I don’t want to forget our friends in Texas and their glorious bluebonnet season.

For behold, the winter is past; the rain is over and gone. The flowers appear on the earth, the time of singing has come, and the voice of the turtledove is heard in our land.

This entry was posted in Family, Poetry, The Culture, Uncategorized. Bookmark the permalink.

10 Responses to Is Spring really here?