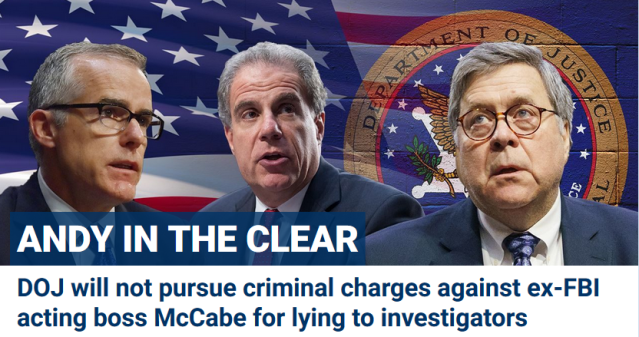 The Justice Department said Friday it will not pursue criminal charges against former FBI deputy director Andrew McCabe, after a nearly two-year-long investigation into accusations brought by the agency’s independent watchdog who found that he lacked “candor” when questioned about leaking to the media.

“We write to inform you that, after careful consideration, the government has decided not to pursue criminal charges against your client, Andrew G. McCabe,” Cooney wrote.

The DOJ added: “Based on the totality of the circumstances and all of the information known to the government at this time, we consider the matter closed.”

This entry was posted in Current Events, Government, Politics, Uncategorized. Bookmark the permalink.