Planning for Thanksgiving? I have already ordered a free-range fresh turkey that will be delivered on the Tuesday before the big day, and I plan to roast it in pieces after an overnight dry brine. Here’s the process and recipe I will use:

I have NEVER cooked a turkey on Thanksgiving that isn’t whole and stuffed, so this is a complete departure for me. Turkey is delicious no matter what, so I have high expectations. I have spit roasted whole small turkeys on a gas grill before, and that is absolutely delicious, if you want to try something different, but when I did it, it was July or August.

I love Brussels sprouts. I have a new recipe that I have already tried, and will prepare for Thanksgiving. Really, really good! The fresh lime juice and zest add just the right counterpoint to the sweetness of the glaze. It is called Brussels Sprouts With Pistachios and Lime. Here’s the recipe. 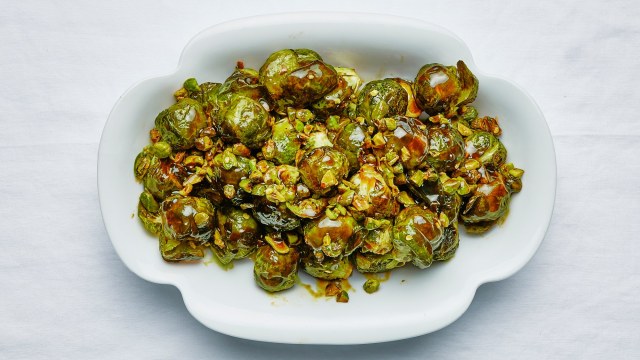 I ordered the date molasses from Amazon. If you don’t want to purchase it, I imagine that you could use all honey for the sweetener.

In addition to these new items, I will be making my usual Jiffy corn casserole, which the grandsons love, butternut squash, fresh cranberry sauce (made with orange and cinnamon), mashed potatoes, gravy, and hot rolls. I might also make a second main dish for my vegetarian grandson, but haven’t decided which one yet. Could be Rigatoni with Broccoli Sauce.

Are you making your plans?

This entry was posted in cooking, Holidays. Bookmark the permalink.

90 Responses to Thanksgiving planning and sharing !!