Today in History – the Battle of Baltimore 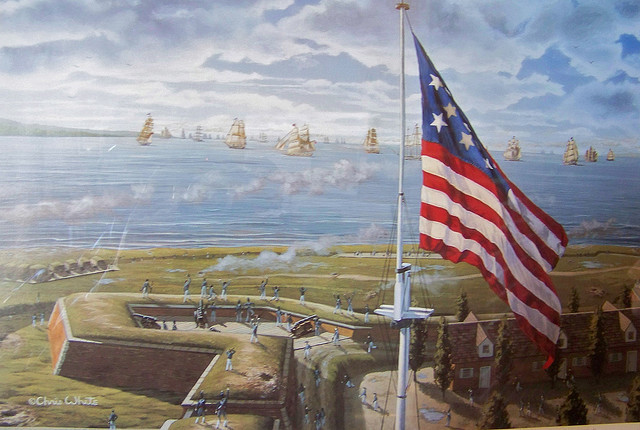 205 years ago today the sun rose over Ft. McHenry in the midst of the Battle of Baltimore. It was then that those watching could see clearly that the Flag still stood over the fort; the defenses had held.  When he saw it, Francis Scott Key wrote the words that would become our National Anthem, The Star Spangled Banner.

An American lawyer and poet, Francis Scott Key, was on a mercy mission for the release of Dr. William Beanes, a prisoner of the British. Key showed the British letters from wounded British officers praising the care they received from Dr. Beanes. The British agreed to release Beanes, but Key and Beanes were forced to stay with the British until the attack on Baltimore was over. Key watched the proceedings from a truce ship in the Patapsco River. On the morning of the 14th, Key saw the American flag waving above Fort McHenry. Inspired, he began jotting down verses on the back of a letter he was carrying. When Key reached Baltimore, his poem, titled “Defence of Fort McHenry”. was printed on pamphlets by the Baltimore American.

His sloop alone  in the bay, Francis Scott Key looked fearfully towards the shoreline.  A breeze began to move across the water’s surface and the smoke of battle began to shift ever so slightly to reveal patches of blue sky.  And then, in the distant blue there appeared new colors….red and white….brief glimpses of the two-feet wide stripes of the Star Spangled Banner.

Then a star appeared in the daytime sky, then another….then fifteen stars in the daytime.  What a welcomed site they were.  Mr. Key’s heart swelled with hope, and pride in the men who had so valiantly fought through the night to keep that flag flying.  Reaching into his pocket he withdrew an envelope and began to write his thoughts:

Oh, say, can you see, by the dawn’s early light, What so proudly we hail’d at the twilight’s last gleaming?

Whose broad stripes and bright stars, thro’ the perilous fight,  O’er the ramparts we watch’d, were so gallantly streaming?

And the rockets’ red glare, the bombs bursting in air,  Gave proof thro’ the night that our flag was still there.

O say, does that star-spangled banner yet wave

O’er the land of the free and the home of the brave?

Ultimately, the British failed in capturing Baltimore.  The land attack failed and  Fort McHenry withstood the heavy British bombardment by sea.  The Battles of North Point and Baltimore had all but vanquished any hopes of British victory in the War of 1812.  With these battle victories, the War of 1812 had reached its turning point and  of victory over the British was imminent.

O, thus be it ever when freemen shall stand,
Between their lov’d homes and the war’s desolation;
Blest with vict’ry and peace, may the heav’n-rescued land
Praise the Pow’r that hath made and preserv’d us a nation!
Then conquer we must, when our cause it is just,
And this be our motto: “In God is our trust”
And the star-spangled banner in triumph shall wave
O’er the land of the free and the home of the brave!

This entry was posted in History. Bookmark the permalink.